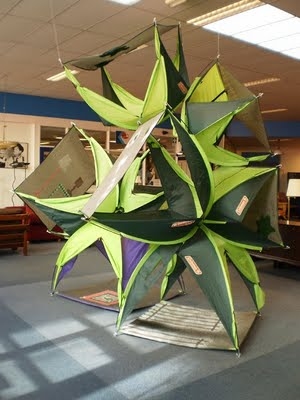 Yurt City's Sheila Ross and Laura Ten Eyck were invited to create a Yurt City project for the 3rd leg of the traveling Kuf/Mold exhibition in Rotterdam, The Netherlands in September 2009. Amoibe (Yurt City) a joint project by Ross and Ten Eyck was the result. It was installed in a very large second hand/junk shop called Piekfijn. The concept of this show was to put art in places where it is not normally seen. Amoibe was installed with more than 60 other site specific works in the Oud Charlois district of Southern Rotterdam on the Maas River.
Amoibe Yurt City
Loading...